Try the Free Math Solver or Scroll down to Tutorials!

(based on slides written by Michael Grant)

most memory usage and computation time in optimization methods is spent on numerical linear algebra, e.g.,

• and solving them
– factoring, forward and backward substitution, . . .
. . . so knowing about numerical linear algebra is a good thing

• Matlab (Octave, . . . ) is OK for prototyping an algorithm
• but you’ll need to use a real language (e.g., C, C++, Python) when
– your problem is very large, or has special structure
– speed is critical (e.g., real-time)
– your algorithm is embedded in a larger system or tool
– you want to avoid proprietary software
• in any case, the numerical linear algebra in Matlab is done using
standard free libraries

written by people who had the foresight to understand the future benefits
of a standard suite of “kernel” routines for linear algebra.
created and organized in three levels:

or a single call to the Level 3 routine cblas_dgemm

the Level 3 choice will perform much better

why use BLAS when writing your own routines is so easy?

blocking is used to improve the performance of matrix/vector and
matrix/matrix multiplications, Cholesky factorizations, etc.

driver routines call a sequence of computational routines to solve standard
linear algebra problems, such as

first we solve the system

using this approach we could exploit structure in H, e.g., banded

What about other languages?

an alternative is to use a “native” library, such as 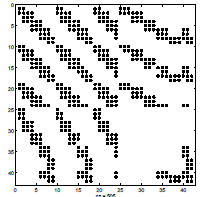 • A ∈ Rm×n is sparse if it has “enough zeros that it pays to take
advantage of them” (J. Wilkinson)

• usually this means nnz, number of elements known to be nonzero, is
small: nnz

sparse matrices can save memory and time

• several methods used
• simplest (but typically not used) is to store the data as list of (i, j,Aij)
triples
• column compressed format: an array of pairs (Aij, i), and an array of
pointers into this array that indicate the start of a new column
• for high end work, exotic data structures are used
• sadly, no universal standard (yet)

sadly there is not (yet) a standard sparse matrix BLAS library

typically include
– A = PLLTPT Cholesky
– A = PLDLTPT for symmetric indefinite systems
– A = P1LUPT2 for general (nonsymmetric) matrices
P, P1, P2 are permutations or orderings

• for Cholesky factorization, the ordering can be chosen based only on the
sparsity pattern of A, and not its numerical values

– when solving multiple linear systems with identical sparsity patterns,
symbolic factorization can be computed just once
– more effort can go into selecting an ordering, since it will be
amortized across multiple numerical factorizations

• ordering for LDLT factorization usually has to be done on the fly, i.e.,
based on the data

we list some other areas in numerical linear algebra that have received
significant attention:

there is considerable existing research, and accompanying public domain
(or freely licensed) code