Try the Free Math Solver or Scroll down to Tutorials!

Here we review the basic rules and procedures of algebra that you need to know in
order to be successful in calculus.

The real numbers have the following properties:

in the Distributive Law, we get

If we use the Distributive Law three times, we get

This says that we multiply two factors by multiplying each term in one factor by each
term in the other factor and adding the products. Schematically, we have

In the case where

To add two fractions with the same denominator, we use the Distributive Law:

Thus, it is true that

But remember to avoid the following common error:

to see the error.)
To add two fractions with different denominators, we use a common denominator:

We multiply such fractions as follows:

In particular, it is true that

To divide two fractions, we invert and multiply: 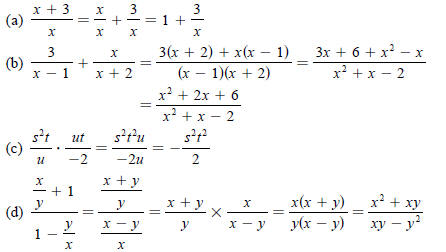 To factor a quadratic of the form

so we need to choose numbers

SOLUTION The two integers that add to give 5 and multiply to give -24 are -3 and 8.
Therefore

SOLUTION Even though the coefficient of

is not 1, we can still look for factors of the
form

Some special quadratics can be factored by using Equations 1 or 2 (from right to
left) or by using the formula for a difference of squares:

The analogous formula for a difference of cubes is

which you can verify by expanding the right side. For a sum of cubes we have

SOLUTION Factoring numerator and denominator, we have

To factor polynomials of degree 3 or more, we sometimes use the following fact.

6 The Factor Theorem If P is a polynomial and

is a factor
of

where b is an integer, then
b is a factor of 24. Thus, the possibilities for b are

By the Factor Theorem,

is a factor. Instead of substituting further, we use long division as follows: 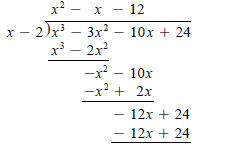 and can be accomplished by:

1. Factoring the number from the terms involving .
2. Adding and subtracting the square of half the coefficient of .

In general, we have

by completing the square.
SOLUTION The square of half the coefficient of x is 1/4. Thus

The roots of the quadratic equation

the quadratic formula gives the solutions

that appears in the quadratic formula is called the
discriminant. There are three possibilities:

the equation has two real roots.
2. If

the equation has no real root. (The roots are complex.)

can’t be factored and is called irreducible.

is irreducible because its discriminant is
negative:

Therefore, it is impossible to factor

Recall the binomial expression from Equation 1:

If we multiply both sides by

and simplify, we get the binomial expansion

Repeating this procedure, we get

In general, we have the following formula.

9 The Binomial Theorem If is a positive integer, then

SOLUTION Using the Binomial Theorem with

The most commonly occurring radicals are square roots. The symbol

makes sense only when

Here are two rules
for working with square roots:

However, there is no similar rule for the square root of a sum. In fact, you should
remember to avoid the following common error:

to see the error.)

In general, if is a positive integer,

are not defined. The following
rules are valid:

Then we can take advantage of the formula for a difference of squares:

EXAMPLE 16 Rationalize the numerator in the expression

Let be any positive number and let be a positive integer. Then, by definition, 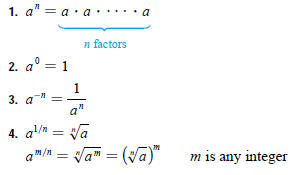 11 Laws of Exponents Let and be positive numbers and let and be any
rational numbers (that is, ratios of integers). Then 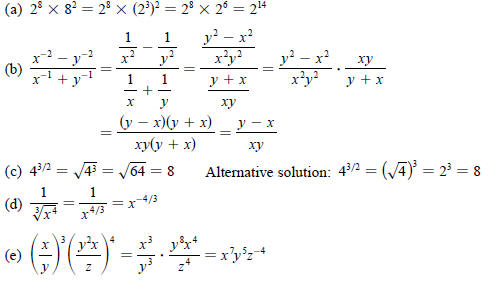 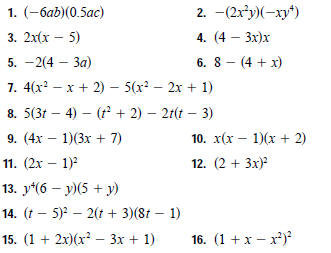 17–28 Perform the indicated operations and simplify. 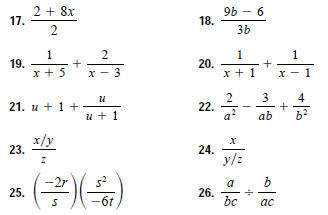 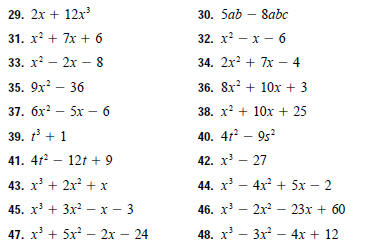 69–72 Which of the quadratics are irreducible?

73–76 Use the Binomial Theorem to expand the expression.

83–100 Use the Laws of Exponents to rewrite and simplify
the expression. 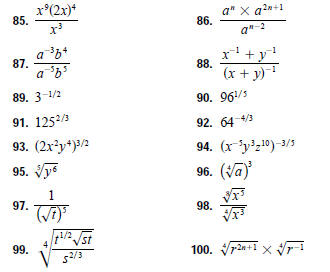 109–116 State whether or not the equation is true for all
values of the variable. 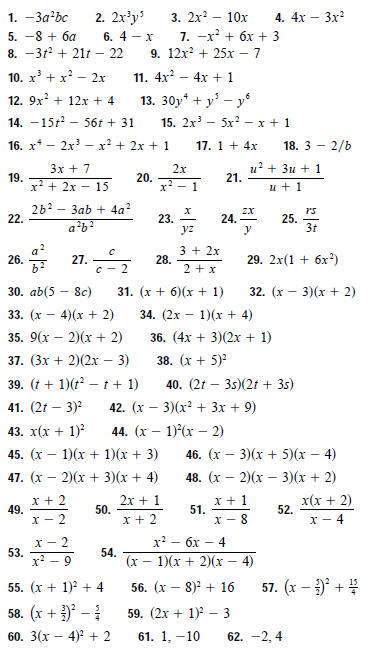 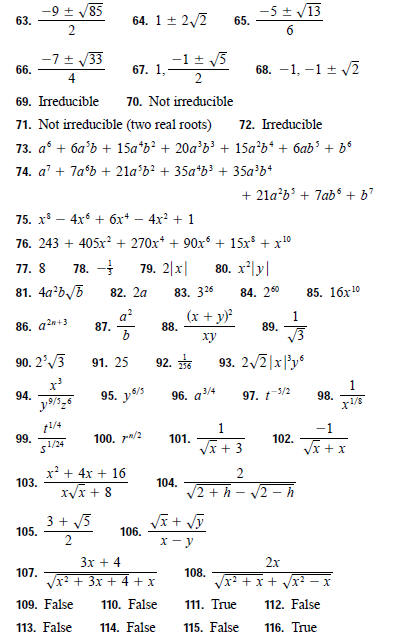